In Chaparda the majority of my time was spent in the Girnar English medium school. This school runs form nursery to standard 8, and I was able to spend time in every standard, taking classes myself and teaching individuals who needed more help. The head teachers’ idea behind the school is for children to not have examinations and reduce the competitive nature that has developed in many schools. The school did not just focus on studies, it has a wide range of extracurricular activities including assembly shows, yoga, arts, and sport. 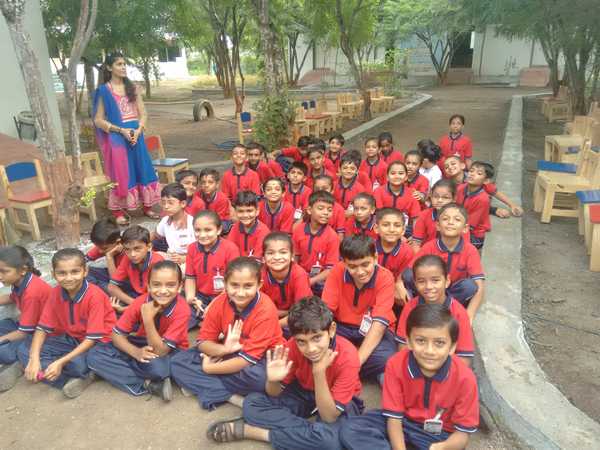 Although the school is an English medium school, Gujarati is still widely spoken. It is used to translate new vocabulary and also aid and reinforce understanding of exercises given to the children. It was very useful that I can speak Gujarati fluently, although there were still difficulties in communication. My accent made it slightly difficult for the children to understand me, and the mix of Gujarati/Swahili words used at my home caused some confusion. The majority of the children at the school came from the surrounding villages or the ashram. In the villages there can be different dialects and slang terminology that I was not familiar with. After clarifying with the other teachers, eventually I came to understand and teaching became easier.

Some children at the school moved from a Gujarati medium school to Girnar, therefore their English was weaker than the other students. This made it difficult for them to understand the lessons, and keep up with the other children in their class. I was able to have one on one teaching sessions with these children. This included reading with them, teaching them grammar and sentence structure, or even going over the alphabet. I really enjoyed this as I could see the difference it made for them. I could see improvements in their handwriting, reading, and understanding within the three weeks I was there.I was very fortunate to be at the school for their annual sports day. This ran over the course of 2 days. They played many games, which included lemon spoon race, wheel barrow, kabaddi, musical chairs, and cricket. The teachers joined in many of the games, and we organised the tournaments. In the races, the older standards took the games very seriously. This was amusing to the parents and the teachers as the childrens’ competitiveness was shown.

I am very glad that I was fortunate enough to go to Chaparda. I met students who have so many skills and unique personalities which makes teaching them a pleasure and makes me look forward to having another lesson with them. I became good friends with the teachers and have had future invitations to their weddings. I thoroughly enjoyed my time in Chaparda and look forward to going again in the future.